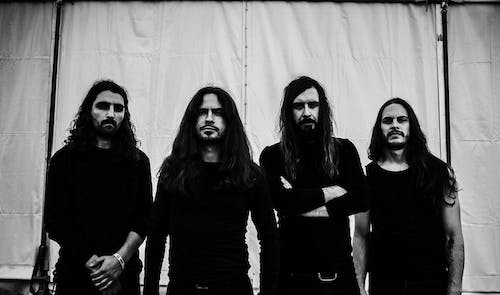 iCal
Google
Uncle Acid & The Deadbeats' May 27 show at Slowdown has been postponed.

We are currently working on a new date for the show and will post that as soon as we have it. All tickets purchased for the May 27 show will be honored for the new date. We appreciate your understanding.

About Uncle Acid & The Deadbeats

You can probably feel it already. Amid the shimmering haze of dusk. In the marrow of your bones. The darkness is getting darker. Malevolent forces are on the prowl. The wasteland is beckoning. Uncle Acid is on his way home.

The brainchild of mercurial Cambridgeshire mystic Kevin Starrs, Uncle Acid & The Deadbeats have been making extraordinary music since 2009. Always too bold and idiosyncratic to be easily pigeonholed, they emerged from an obscure corner of the labyrinthine English underground as shadowy purveyors of a new and overwhelmingly psychedelic take on the gruff and gritty rudiments of hard rock and turbo-blues, powered by the dark, lysergic heart of the late ‘60s and early ‘70s and drenched in woozily macabre imagery. Steeped in both the wayward melodies and mischievous arrangements of psychedelic pop and the dissonant thunder of proto-metal and doom, Starrs’ greatest feat has been to create an entirely fresh sonic world from these most familiar of ingredients.

Uncle Acid & The Deadbeats’ reputation was swiftly built on towering, riff-driven milestones like 2011’s breakthrough opus Blood Lust and its warped and wicked follow-up, Mind Control (2013); both released through Rise Above Records and subsequently showered with critical acclaim. By the time Starrs’ band created The Night Creeper in 2015, their mutation into heavy music’s most unmistakable eccentrics was complete, as their leader cranked up the melodic weirdness, rendering his monstrous ideas in something approaching three-dimensional Technicolor.

Firmly established as cult heroes, Uncle Acid & The Deadbeats consolidated The Night Creeper’s triumph by touring the world extensively, including a string of sold out shows in the U.S., Europe and Australia. After sustaining that momentum with Starrs’ long-awaited remix of his band’s hard-to-find eponymous debut album from 2010, the singer/guitarist and his henchmen spent much of the last year immersed in the process of making a fifth full-length album. 47 minutes of vital, audacious and frequently bewildering heavy psychedelia, it bears the title Wasteland and is instantly recognisable as Starrs’ most immersive and evocative body of work yet.

“There’s not enough melody or harmony in new music for my liking,” says Starrs. “I wanted to go even further with all of that this time, and really force it down people’s throats! It’s important to me that someone keeps it going, especially in heavy music. I always write to my own tastes, so as long as it appeals to me, I don’t really think about it. But I would say that it’s all been an instinctive progression.”

A disorientating journey through Starrs’ wonkiest dreams, Wasteland glides majestically from punchy and direct psych-rock anthems like I See Through You and Shockwave City to the viscous, somnambulant ooze of the eight-minute No Return and the twinkly-eyed bad trip of the album’s mesmerising title track. Recorded at the legendary Sunset Sound studio in Los Angeles, Wasteland boasts the kind on irresistibly raw and exuberant sound that only the greatest bands can generate. Later completed at Starrs’ own studio, the new songs showcase a newly refreshed line-up, with Starrs once again joined by long-time bassist Vaughn Stokes (who will play rhythm guitar at future live shows, handing over bass duties to Jus Smith) and also latest recruit, drummer Jon Rice.

“We recorded the basic tracks the way we always do,” says Starrs. “Everyone in one room, live and straight to tape. We worked with a great engineer called Geoff Neal (NIN/Motorhead/Fuzz), who really understood what we were going for and how to capture it. Playing in the same room where so many classic albums were made definitely inspired us. Even small things like running the guitars through the same echo chamber that Van Halen used in the ‘70s, it all added to the overall experience.”

Yet more confirmation that Uncle Acid exist in their own musical universe, Wasteland is also a powerful cautionary tale: one rooted in the alien landscapes of Starrs’ imagination, but with a very clear connection to the deranged chaos of today’s political world. As humanity cheerfully circles the plughole, Dystopian visions and present-day horrors have become more-or-less interchangeable, making Wasteland’s ghoulish surrealism a lot more pertinent and disturbing in the process.

“The album is set in a land where people live in walled cities, under heavy surveillance, cut off and in fear of one another,” Starrs explains. “All their thoughts, knowledge and memories have been wiped clean, leaving them like the living dead, barely functioning and addicted to the glow of flickering propaganda screens.”

“In the underworld, there are program discs for the brain that can replace stolen thoughts and allow people to finally think for themselves,” he continues. “It gives them knowledge to escape the misery of the cities and to reach the freedom of the outer wastelands, but the wasteland, of course, is total hell on earth. The general idea seemed quite fitting with all the propaganda and misinformation that we’ve been bombarded with in recent years.”

While most musicians seem content to chase their own (or other people’s tails), Uncle Acid & The Deadbeats remain proud and resolute individualists and Wasteland is simply their most powerful and memorable spurge of creativity to date. Masterfully echoing the magical atmospheres of heavy music’s turbulent past while sounding entirely unlike anything else available to human ears, this is what happens when the shadows come to life and suffocating darkness, Uncle Acid & The Deadbeats style, is the only show in town. 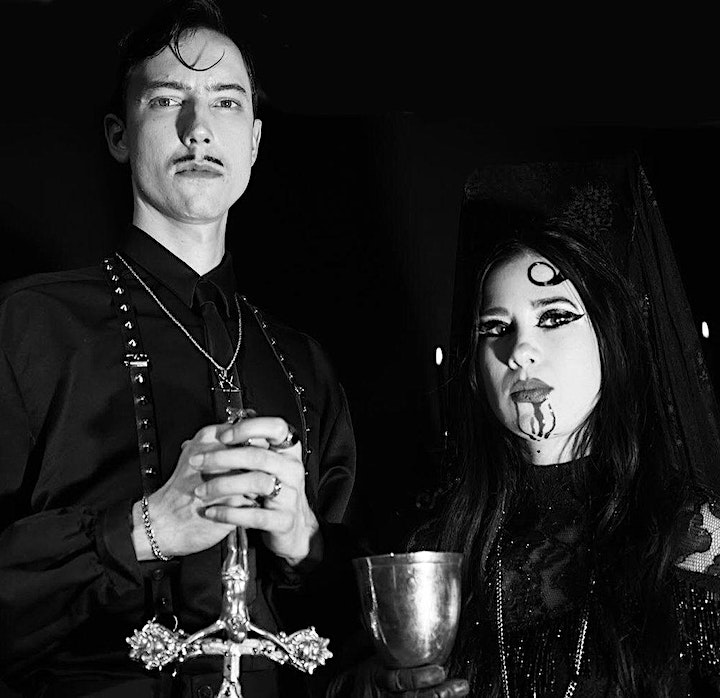 Everybody knows that the Devil has all the best tunes. From Robert Johnson selling his soul at the crossroads to the blood-soaked black metal of Norway, Satan has long loomed large over the music world, striking fear into the hearts of the sanctimonious. But nothing that has gone before will prepare you for the arrival of Twin Temple: Los Angeles’ one and only purveyors of Satanic Doo-Wop. Devout Satanists and meticulous preservers of rock’n’roll’s ancient, timeless spirit, this black-clad and effortlessly stylish duo have created a sound that blends their Satanic ideology with the irresistible sass and melody of classic ‘50s and ‘60s rock ‘n’roll. The result is Twin Temple (Bring You Their Signature Sound…Satanic Doo-Wop), a debut album that not only serves to salute the Dark One, but also delivers some of the catchiest and coolest music to emerge from any genre in years.

“It’s really just a reflection of everything we love,” explains vocalist Alexandra James. “We’ve always loved rock ‘n’ roll, especially from the golden era of American music, but we’re also Satanists and study the Occult. We both practice magick. It was just a crazy idea– ‘Why can’t you love Roy Orbison and hail Satan at the same time?’ Satanism has been relegated to the metal scene for so long, but we are Satanists and listen to The Platters and Buddy Holly, you know? We love metal too, but this is a reflection of who we are as people. This record was something we wanted to create for ourselves… we were happy to see that it resonated with other people out there, too.”

Originally released independently by the band and limited to a suitably malevolent 666 vinyl copies & given a full release on Rise Above in Spring 2019, Twin Temple’s debut is so beautifully conceived and executed that it sounds like a long, lost classic from the ‘60s, unearthed in some dusty studio vault. With Alexandra’s soulful but siren-like voice and partner Zachary James’ dazzling, authentic arrangements, songs like The Devil (Didn’t Make Me Do It) and I’m Wicked pledge their allegiance to Satan in the most bizarrely accessible and infectious of ways. Bolstered by plenty of analogue hiss and a devotion to old school recording techniques, it’s an album that brings the band’s unique and enlightened take on Satanism to vivid, vital life.

“Something we’re sick of is all the overproduced records,” says Alexandra. “It just takes the soul out of music. With this record, we wanted to get rid of all of that. We looked at how all our heroes made records in the ‘50s and ‘60s. They weren’t even mixing in stereo back then, so that’s why we made the record in mono. We did everything, including the vocals, live to tape. We went in the studio, played the songs two or three times and chose the best takes. The whole record was done in a day and a half. It has a rawness to it because we wanted to capture the human element, instead of overproducing everything. Perfect is boring.”

With a Satanic philosophy that prizes individualism, respect, equality and defiance, Twin Temple are intuitively in tune with rock’n’roll’s integral outcast culture, even if the fiendishly seditious sound of Alexandra singing enticingly about Sex Magick may make more than few music critics and unsuspecting punters spit their coffee across the room. Ultimately, this transgressive act of musical mischief is as subversive as it gets in this age of societal division, insidious ignorance and empty hostility.

“To us, there is a connection between Satanism and rock ’n’ roll – they’re both very much defined by transgression, rejection of societal norms and a fierce sense of individualism and outsider culture,” Alexandra avows. “Historically, American rock ’n’ roll played an integral role in social justice and equality. In the face of racist Jim Crow laws of the south & segregation, you had black and white teenagers dancing together at the Frankie Lymon shows. This was about social change, about breaking down boundaries and all oppressive norms of the old guard. In our minds, vintage rock’n’roll, doo-wop and Satanism go hand in hand. But at the same time, we recognize that it’s not the most likely of pairings!”