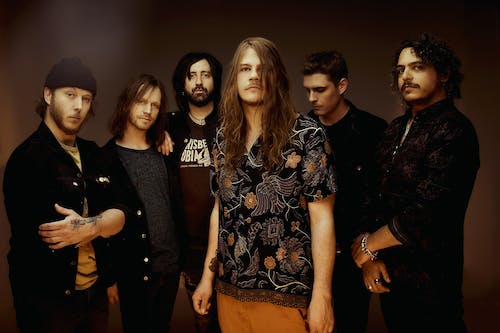 iCal
Google
Canadian rock band The Glorious Sons bring their A War On Everything North American Tour to Slowdown on February 23rd.

About The Glorious Sons

The Glorious Sons' second full-length album, Young Beauties & Fools, is all about honesty.

More specifically, it's about exploring the adventures (and frequent misadventures) of main songwriter Brett Emmons in the truest way. It's also an album where The Glorious Sons — rounded out by Brett’s older brother Jay Emmons (guitar), Chris Koster (guitar), Adam Paquette (drums) and Chris Huot (bass) — capture all the listlessness and confusion of young adulthood in 10 doses of modern rock.

"It's basically the story of a 24-year-old kid,” says Brett. “They’re simple songs about alcoholism and the mostly autobiographical story of my life. The whole thing is derived from the thoughts, actions and feelings of a kid who doesn't really know himself and the consequences of those actions."

Glorious Sons’ hardscrabble tales come naturally. A high-spirited rock band with blue collar roots, they truly found themselves when Brett quit school in 2013 to join them as lead singer. Subsequent years of hard touring and hard partying — sometimes in places so sketchy, as Brett puts it, “There was no electricity in the building” — provided fuel for the songs on Young Beauties & Fools.

Whether it’s the rock 'n' roll bender “My Pour Heart,” the not-so-classic boy-meets-girl story of “Josie,” or the deeply embarrassing punch-up at a wedding tale “Everything Is Alright,” Brett’s songwriting deftly explores the imperfect humanity of both himself and the many characters he introduces over the course of the album.

It wasn’t easy to capture that realness. The band wanted to range further, to grow and evolve from the successes of 2014’s The Union album. That record was an immediate hit on the Canadian radio rock landscape. Glorious Sons scored seven consecutive Top 10 rock radio tracks, won two SiriusXM Indie Awards (Group of the Year and Rock Group of the Year) and received a Juno Award nomination in 2015 for Rock Album of the Year.

Eighteen months of recording fits and starts led the band to Los Angeles to work with production team Fast Friends (Frederik Thaae, Ryan Spraker, Tom Peyton). It wasn’t until they started exploring a collection of old voice memos on Brett’s phone that they had their eureka moment. The subsequent creative outburst resulted in an album written in 12 days and recorded in 14.

“It was our first time working with these guys in the studio and we were still kinda feeling each other out,” says Brett. “There were times when it almost felt like a blind date. And we had been in the studio with a couple of other producers prior to that and went home empty handed. So after a few lukewarm conversations about ideas, I said to them, ‘Boys, can I show you something?’ I took out my iPhone and played ‘Josie’ and they just went fucking nuts. They wanted us to challenge ourselves as players and songwriters and pushed me to write from personal experience. After that, the hardest part of recording was choosing which songs to keep for the album. I’m forever grateful to them for teaching me to trust myself as a writer and help find that voice.”

There should be lots of opportunities to see Glorious Sons play the songs from Young Beauties & Fools. By their count the band has driven across Canada "at least 10 times" and played upwards of 300 shows to support their last album.

"You don't know what you’re going to get night to night from us," says Jay. "It's something you have to see and it's interesting and powerful."

"It's also an inch from either side of falling off the tracks every single night," adds Brett.

Which is perfectly fitting for a band living young and foolish.

bringin rock n roll back to the people

FREAKABOUT is an electrifying four-piece rock band from Lincoln, Nebraska. Rooted in classic Rock’n’Roll, the band has also been identified with a very dynamic, eclectic sound that has allowed them to perform alongside multiple genres of bands such as Dead Sara, Jessica Hernandez & The Deltas, Modest Mouse, G-Easy, and more.

In support of their debut album “Don’t We All” released in March of 2015, FREAKABOUT began a handful of extensive tours along the east coast, the south and midwest including a spot on the sold out Maha Music Festival.

The band was recently awarded "Best Rock" at the Omaha Entertainment and Arts Awards in January of 2016 and were listed as one of the "Top Bands to Watch for in 2016" by Hear Nebraska.

FREAKABOUT is a true live band. With a heart-pounding groove, paved the way by Ian Francis on drums and Ben Frerichs on bass, the band captivates the audience night in and night out, no matter the setting. They have attracted a wide array of audiences and continue to grow their fanbase, all the while holding true to their own unique interpretation of what rock and roll music is.