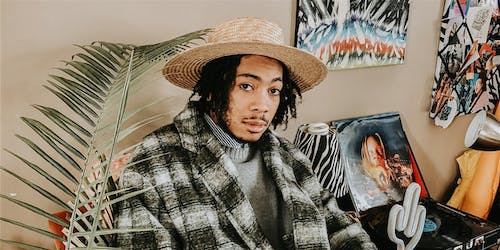 Following the success of his co-starring debut in the “Out Of Omaha” documentary film produced by J.Cole, which has won over 2 awards and several million streams and received critical acclaim from the likes of . Gabrielle Union, Rapsody, Warren G, Terrace Martin, and PRO (Empire Re- cords) also scoring his music on the film as well.

The 28 year young rapper, singer, graphic artist, and producer, who’s sound has brought him on stages with Kid Cudi, Mac Miller, Saba, Maxo Cream, Flo Rida, and many more. He was described as “Top Rapper to Watch From Every State” (r/hiphopheads) in 2017. “Scky Rei finds peers in a host of sort of post - Odd Future - bubble artists like Danny Brown, Joey Bada$$ and A$AP Rocky.” - Hearnebraska

Scky’s single “No Friends”, which production is credited to grammy nom- inated Phonix Beats and K-so “Hook Genius” Jaynes whom which have worked with the likes of Travis Scott, Cardi B, J. Cole, Trey Songz, Meek Mill, and now Scky Rei will debut 2019-20. Along with other songs in production from great producers presuming it’ll be an exciting bright future for Scky Rei.

Along with 2 acclaimed EP and LP releases in 2015 and 2019, Scky es- tablished himself as a captivating live performer with a series of tour dates and festivals. Following a sold out debut headline show and pre- miere for “Out Of Omaha” in Omaha at the end of the year, he embarked on a successful showings at SXSW as well as playing to thousands of people at venues, such as Baxter Arena. Supports slots for Kid Ink, Raury, Conor Oberst, DJ Yella (N.W.A.) and Taylor Bennett followed, along with festival dates including IndyFest KC, Ames Music Festival, Maha Music Festival and Holland Stages Festival.

In 2020, Scky will begin the year embarking on his debut singles and project as a solo, covering soundscapes throughout the North Americas and international waters.