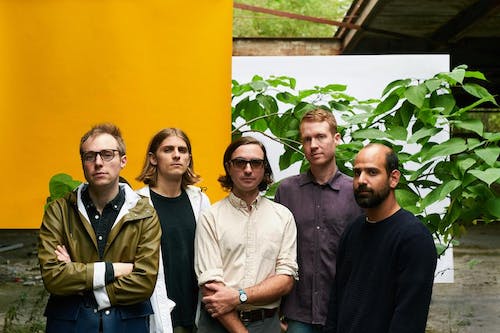 Over the last decade, Real Estate have crafted warm yet meticulous, pop-minded music, specializing in soaring melodies that are sentimentally evocative and unmistakably their own. While 2017’s In Mind longed for normalcy against the backdrop of a life as strange as a touring musician’s. The Main Thing brings that longing to a universal and urgent place, acknowledging the anxieties inherent in protecting a quiet existence. Reflecting on their collective concerns – existential, environmental, political – the group’s fifth album is the result of many deep conversations, resulting in a collectively renewed commitment to their music and a desire to push themselves harder than ever in the work that they love so much. What emerges is a superlative collection of interrogative songs as full of depth, strangeness and contradictions as they are lifting hooks.

“I’ve got this family, and I feel this responsibility to gild this crazy world,” says guitarist, singer and primary songwriter Martin Courtney. The record’s most sentimental moments, then, are crystallized home movie flashes directed at Courtney’s children. “I can’t imagine what will be / in your earliest memories,” he sings on “You.” These mentions are set against darker realities; on “A Silent World,” he pleads, “Can’t let you wander off / Out in this wicked world.” Then there’s guitarist Julian Lynch’s first authored song for the band, “Also A But,” in which disembodied vocals intone “a poison bloom” and “mushroom cloud” apocalypse, set against sci-fi synths, unresolved guitars and propulsive drums. Instead of exploiting the juxtapositions between these opposing emotional modes, Real Estate embraces cohabiting contradictions. “It didn’t feel dark to me,” Courtney clarifies. “To me, it’s the normal stuff.”

This duality is built into the arrangements themselves, interlocking emotionally with the nuance of the lyrics. “Gone,” about casting out toxic phantoms of the past, sets ominous descending strums against dirge-y drum machine before clearing the air with a lilting guitar lead. “Procession,” hallmarked by a bright, two-note motif set under shifting chords and beats, pits hometown pining against generational complacency. The effect is like gazing through a rearview mirror masked by fog, a sentimentalism so obfuscated you’re forced to look forward instead. “We create our own nostalgia. I’m constantly moving so I have more to reflect on,” explains Courtney. “If you look at the first record, it was a wistful feeling we wanted to explore. As we get older, the complexity has become more obvious,” adds bassist and singer Alex Bleeker. That’s paralleled in the album artwork itself; the band enlisted Bjorn Copeland of Black Dice, whose visual work focuses on recycling byproducts of consumer excess, to mimic the layout of Days. Bleeker describes their intention as “the understated Real Estate layout run through Bjorn’s pedalboard.” The effect is uncanny, reflective of this record’s astute self-awareness.

Real Estate’s collaborative evolution saw each member experimenting in new roles. Drummer Jackson Pollis, whose love for soul classics like Curtis Mayfield is transparent in his in-the-pocket groove, also performs synth. Keyboardist Matt Kallman composed “Sting,” one of the two cinematic interludes that grace Side D of The Main Thing. The record’s instrumental epilogue, “Brother,” is a four-year-old

cassette demo from Courtney, whose parts were tracked over and replaced by his bandmates. Courtney, in turn, inspired by the lush detail of Joni Mitchell’s Hejira, subbed certain basslines note-for-note on a synth. Recording over the course of a year in countless sessions at Upstate New York’s Marcata Sound, the band re- enlisted engineer Kevin McMahon, who helmed their sophomore effort Days. And for the first time, they brought in outside players to round out the sessions: filmic string arrangements recall the seventies scoring of Jean Claude Dennier; Amelia Meath of Sylvan Esso provides a delicate duet on the Chic-tinged, self-satirizing ode to stagnancy “Paper Cup”; Pollis’ rhythmic focus is rounded out by up-front percussion and congas provided by Matt Barrick of The Walkmen and Aaron Johnston of Brazilian Girls, respectively.

A working title for Real Estate’s fifth album was Special Album. Instead, they settled on The Main Thing. In part, it’s a reference to the Roxy Music song: “Even before we decided where to record or who to record it with, I knew it needed to sound that good,” enthuses Courtney. “Which is an impossible goalpost, and a good thing.” But the “main thing” has another meaning for the group: a declaration of music making’s centrality to their own senses of self. “We discovered through the care and attention that we brought to this record that making music to resonate with other people is our catharsis,” says Bleeker. “The ‘main thing’ is following your path of inspiration, and hoping to inspire that in people around you. Hopefully the album itself will re- affirm peoples’ commitments to themselves and to each other, as it did for us.” Classic Real Estate reference points are still here – Yo La Tengo, Felt, Steely Dan – but they’re refined into hazier grooves, expanded into extraterrestrial sonic layers, deepened into slow-rolling phases. You can’t hit an impossible goalpost, but you can come close. Pouring all their hopes, dread, excitement, love and labor into these pristine arrangements, Real Estate made The Main Thing a special album indeed. 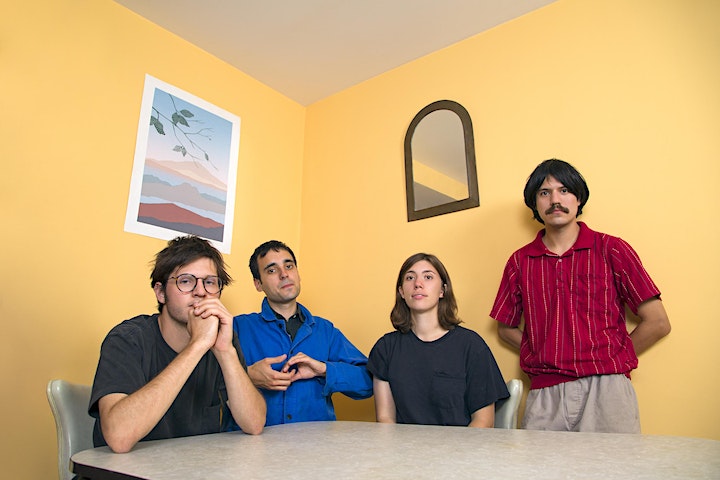 Palm plays rock music backwards. Eve Alpert and Kasra Kurt's guitars occupy themselves most often with the pace-keeping work typical of a rhythm section. Meanwhile, Gerasimos Livitsanos' bass and Hugo Stanley's drums perform commentary and reportage from their deeply embedded positions at the front. The band is firmly attached to the physicality of rock, but not as much its tone; their instruments tend to sound like any number of things at any given time.

None of the members of Palm are formally trained on their instruments. The band formed in 2011 at college in Upstate New York, when high school friends Eve and Kasra met Gerasimos and Hugo. In those early days, the band was just beginning to forge its collective musical identity through experiments in recording and performing live.

Their first album, Trading Basics (2015), was written in Hudson, NY, a riverside outpost where the group could clarify its intentions outside the direct influence of nearby cultural capitals. That year, the members of Palm relocated to Philadelphia, where they continue to live only a few blocks apart from one another. This proximity has facilitated a level of collaboration necessary for a sound so slippery to remain in the firm grasp of its players.

On 2017's Shadow Expert EP, they made use of the steady hand granted by a tireless touring schedule, cutting their songs to efficiencies of pop confection without sacrificing the avant-adventurism at the center. The effort was met with praise from such outlets as Pitchfork, Stereogum, Spin, and Tiny Mix Tapes, who likened the sound variously to Stereolab, Slint, Sonic Youth and Broadcast. With Rock Island (2018), Palm excuses the company of these myriad influences with a sly brush of a hand, ushering the listener into a new domain, thrillingly strange for all its familiarity.