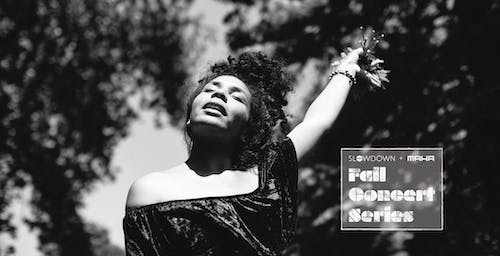 And How, Cameron Logsdon, Angi Sada, Those Far Out Arrows, J. Crum

iCal
Google
Mesonjixx will play on October 3 as part of the Slowdown + Maha Fall Concert Series!

Outside at Slowdown - Rain or Shine

This show will take place in our parking lot, located to the east side of Slowdown. The entrance will be located in the walkway between Slowdown and Hook & Lime. Please abide by the markings on the pavement when waiting in line for entry.

Your safety, and the safety of our team and visiting artists, are our first priorities at Slowdown. We’ve put measures in place at every guest and staff touchpoint to ensure that your experience is as safe and fun as possible.

The lot will be set up with 10'x10' sections or "pods." Pods are available first come, first pick and have a maximum capacity of 10 persons each. Pods may not be moved or combined. Feel free to bring a lawn chair if you would like to sit during the show.

All guests and staff are required to wear masks when entering and moving about the venue. For example, if you're walking to the bar or going to the restroom, a face mask must be worn. If you are within your pod the use of a mask is recommended but not required.

Be sure to be prepared when you arrive at the venue:

• Bring a mask that covers your nose and face

• Have your ticket and ID ready

• Bags or purses larger than 5"x6" are not allowed

• One folding chair or lawn chair per person is allowed

• Re-entry is not permitted

Our cleaning protocols and precautions have been elevated above the recommended requirements throughout the venue. This includes dedicated staff members for frequent cleaning of high-touchpoint areas.

Hand sanitizer will be available throughout the venue. Staff members will be accessible if sanitizing products need to be located or replenished.

Please refrain from entering Slowdown if you or anyone in your party are experiencing the following symptoms:

• Other symptom of Covid related illness per CDC Guidelines

Please feel free to contact us if you have any questions, comments or concerns. Thank you for your continued cooperation and support. We cannot wait to see you again!

Mary Elizabeth Jo Dixen Lawson aka Mesonjixx is an artist who currently resides in Omaha. Her father is Black American born and raised in the Alabama Ozarks and her mother is a South Pasifika Islander from Honolulu, Hawaii. Mesonjixx is the middle child of five.

While living in Chicago (2009-2014) she honed her songwriting and musical style. She’s since returned to Nebraska to find balance in her interconnected nature of her identities as a woman, as one who belongs to two diasporas of two hemispheres, and as a young black midwesterner who finds the plains of America her home. Mesonjixx creates music to find her unique center.

Soon after her performance debut in 2015, Mesonjixx has not only become a fixture of the Nebraska music scene, but has risen to the top of artists in the Midwest. Both as a solo artist and as a leader of a trio and quartet, which has drawn the most talented musicians of Nebraska.

Her current trio, with keyboardist Nate Asad and percussionist John Evans -- was selected to open for Kamasi Washington’s recent performance in Omaha, and was a returning festival favorite at this year’s True/False Independent Film Festival in Columbia, Missouri.

She describes the music as: Afro-futuristic Experimental Subculture Soul.

And How brings psychedelia into fruition with spaghetti western scores and a dash of samba to boot. Ryan Menchaca, Ashlee Riggs, Andy Cubrich, John Rost, Luke Annis, Gabe Jasso and Blake Deforest play in connectivity like the lovers they are. Listen to their single "Caught Up in the Night" now on all streaming platforms.

Cameron Logsdon is a comedian & writer from Omaha, Nebraska. He likes it there, but travels often. In 2016, he was selected for NBC's Late Night Writer's Workshop, a program aimed at helping writers of diverse backgrounds. As a stand-up, Cameron has been nominated best comedian in Omaha four years in a row, he's opened for comedians like Bert Kreischer, April Macie, and Adam Cayton Holland. He performs regularly at clubs across the country and at festivals including Gilda's LaughFest, the North Carolina Comedy Festival, and more. He was a writer/performer for five seasons of Omaha Live, a local sketch comedy show that aired Saturdays on Omaha's NBC affiliate. He also produces, writes, and hosts a monthly late night comedy show in Omaha, and once gave a TEDtalk about being a teen father.

Born in the dead center of god’s blind spot, Omaha based Angi Sada has performed across the country. Her take on life, love and politics is acerbic on its most hopeful days.

Angi has received nominations from the Omaha Entertainment & Art Awards for her work and also once won 10lbs of Polish sausage at the St. Columbans Fathers festival when she was 10. She is a co-founder of the Funny Ladies of Omaha and The FLOcase, Nebraska’s longest-running all femme comedy show embracing the many faces of femininity.

She’s proud of her Latin roots and unabashedly talks about growing up brown in a really white world. Angi is generally unapologetic in everything she says and does including licking the cheese powder off of the Doritos and putting them back in the bag as a child.

About Those Far Out Arrows

Hailing from the Great Plains of America, Those Far Out Arrows reject the vacuous slogan of “Nebraska nice” and deliver a bipolar pounding that is equal parts Crazy Horse and first wave punk. High-fiber grits served with a wink and a smile. Lyrics that question the status quo, shouts for answers, and declarations of indifference. Realizing that the only thing that matters is bringing the rock and leaving stains.

Here stands a man openly flawed and encumbered with life’s immeasurable expectations, but he’s also a devoted man of God striving for grace. Joshua Crum – just call him J. Crum – speed-raps his feverish words alongside echoing beats and riffs usually coupled with harder rock styles, and counters the intensity with smooth, lingering hooks. Detroit-born and Omaha-based Crum’s inspirational tracks reflect a man bound to his faith, family and fans but with a grittiness churning through time and measures.

“I felt like I’ve grown a lot artistically between Black Sheep and Flawed,” Crum said. “I tried to find the beauty in one’s own vulnerability. I feel I went even deeper into that vulnerability and communicated in a relatable way.”

In the hyper-focused “Monster,” Crum’s crescendo is in the haunting lyrics juxtaposed by the universality of the sentiment “….or do I turn the other cheek….I guess we’re gonna see.” And, just like that, Crum keeps us guessing in sound, styles and his very foundation.

Keith Rodger is a Recording Engineer, Producer, and DJ under the alias Kethro. In 2011 he became known for his highly energetic and sonically diverse DJ sets during his 5-year residency at House of Loom. In 2014, he started touring as an engineer and musician with The Faint, Tuxedo, Icky Blossoms, and Conny Franko. In 2016 he honed his career when he joined Make Believe Studios working on critically acclaimed albums with Jidenna, Jay Prince, Howie D of Backstreet Boys, Logan Richardson, and Joe Hertler & The Rainbow Seekers. In 2020, Kethro is slated to release his first solo project and is currently performing in the Kansas City based group "We The People.”