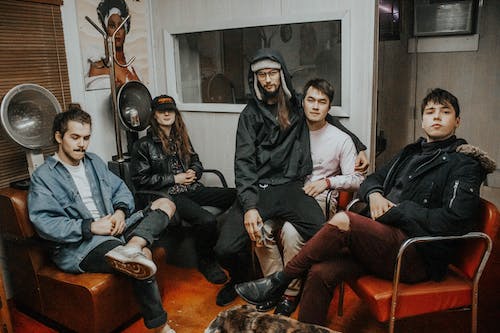 iCal
Google
Omaha's Magū kicks off their tour at Slowdown on March 26th.

David McInnis kept his songs to himself for years, aside from the home-baked piano riffs he occasionally shared with his Instagram followers. He’s a drummer by trade, playing in Omaha bands Timecat, Congruency and Centerpiece in the past decade. But like many soft-spoken drummers before him, McInnis decided it was his turn to have the spotlight. In 2017, he finally brought his piano ideas to life with the baroque pop ensemble project Magū, dubbed after his high school nickname.

His first full-band recording came in the form of the jivey piano ballad, “Julianne,” whose heartbroken lyrics and dynamite hook later kicked off the Change of Heart EP, which dropped in May 2018.

Though McInnis is a product of Omaha’s DIY music scene — he ran the beloved house venue Lucy’s Pub for five years — Change of Heart saw McInnis veer from the rock formula long employed by many an Omaha indie band. After the opener’s fiery piano-rock, the EP covers more sonic territory than many bands do in their entire existence; “No More” is a doomer’s take on late-‘90s Radiohead, “Over Seas” tackles epic arena-rock, and “I Wanna Know” sounds like what could best be described as prog-reggae.

He takes on full production responsibilities for his music too, resulting in unfiltered instrumental and lyrical transmissions straight from his psyche to the listener.

Like McInnis himself, the songs are contemplative, almost to a fault. Though he is front and center in Magū, his lyrics outline a portrait of a lovesick romantic and a chronic overthinker who too often finds himself putting others’ happiness before his own. Existential questions of self-identity and worth tug at McInnis in most of Change of Heart and his half of Tickled Pink, the late-2018 six-song split EP with fellow Omaha songwriter and tourmate Jacob James Wilton. On “Drivin’ in Silence,” Tickled Pink’s sultry, sax-driven midpoint, McInnis reveals where his heart is pulled — anywhere but here. His songs are the ticket out.

Since the release of “Tickled Pink” the band has released their single “Shame” which accompanied an energetic and vibrant music video. Currently Magu is gearing up to release their third EP and working diligently on their first Full Length release. With spring and summer tours planned they’re surely a group to keep on your radar.

Ambient punk euphoria concentrated into small bursts of musical destruction that touches on psychedelic, shoegaze, and garage pop influence. Garst started as a project between Roman Constantino and Casey Plucinski as a punk duo but quickly expanded into the full blown lo fi monster that it is today with the addition of Cannon Dunwoody and Joe Chavez. Garst.