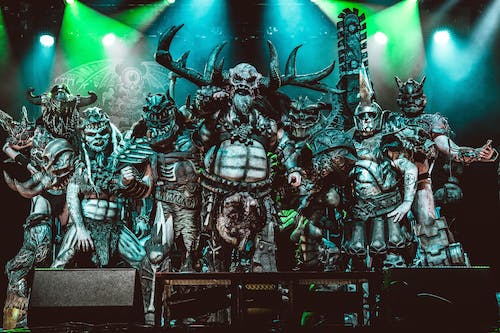 Use Your Collusion Tour

The story of GWAR is carved across the history of this barren and hopeless planet, but GWAR themselves are not of this world... their story begins in the deepest reaches of outer space. Long ago, the beings who would become the rock band GWAR were part of an elite fighting force, the Scumdogs of the Universe. For eons, they served as thralls to a supreme being known only as the Master. But one by one, each future member of the band earned a glaring reputation for being an intergalactic fuck-up. And so, they were banished, sent away on a fool’s errand to conquer an insignificant shitball floating in a dark corner of the universe; the planet Earth. Once here, GWAR shaped the face of the globe, destroying and rebuilding the natural world, and giving rise to all of human history. Aliens to some, gods and demons to others, our erstwhile Scumdogs fucked apes to create the human race, and this fateful unplanned pregnancy would prove to be truly disastrous! 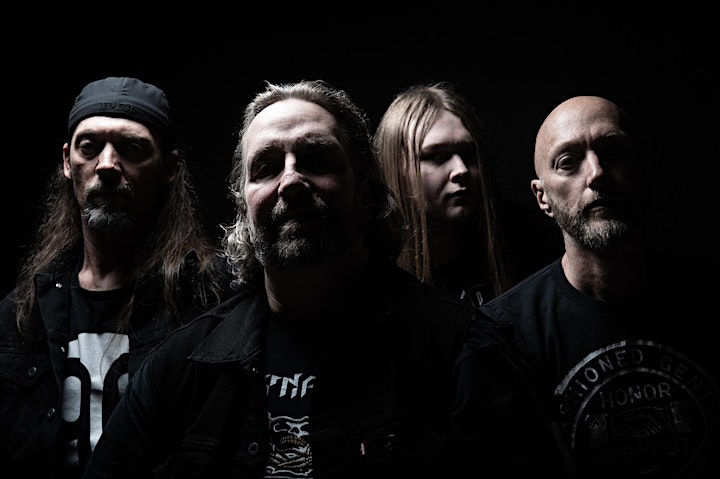 Twenty-three years after dropping their last full-length, ​Sacred Reich are returning in force with the towering ​Awakening​, effortlessly demonstrating that they remain a formidable force in metal. Showcasing everything a fan would expect and hope for from the Phoenix, Arizona crew, it is a timeless collection comprised of blistering thrash, crushing grooves, killer solos and socially conscious lyrics that demonstrate a true understanding of everything that matters most in the world today. ​"Going into it, we had a loose idea as far as knowing that we wanted some fast, heavy songs to honor the old school fans that have supported us and gotten us to this point," states vocalist/bassist Phil Rind. ​"We wanted everything to happen naturally. We didn't want to force anything and we are super stoked with every song. It is easily the best thing we have ever done."

Formed in 1985, ​Sacred Reich were an integral part of the 80s and 90s thrash movement, dropping four albums before splitting in 2000. They would go on to reform in 2006 but strictly as a live act, droppingthe​LiveAtWackenD​VDin2012,butitwasonlyin2018thattheystartedtoworkon new material. ​"Over the last year, we wrote and demoed the songs for the new record. Our drummerDave(McClain,ex-M​achineHead​)wasstillontourwithhisoldbandsoourbuddyTim Radziwill played drums on the demos along with his son, Joey, and they recorded it all at their studio. We wouldn't be here today without their help, they helped get down the basic framework of the songs. They rule, and the whole process of recording was so positive, cool and fun." ​Being very much aware of how their approach to the record affected the outcome definitely played into the finished product. ​"Leading up to it, we talked about the fact that you can't separate the process from the result. Everything you do, how you do it, your attitude while you do it, all comes out in the end. So we tried to do things the right way - and by the right way, I mean, being open to what came."

The return of Dave McClain, who manned the drum throne from 1991 to 1997, and the addition of Joey Radziwill playing guitar, alongside original guitarist Wiley Arnett, are integral facets of the record. ​"Dave is such a killer drummer and person. He works every day to become a better drummer,andImeane​veryday.​Hisworkethicisinspiring.Asmuchashehasaccomplished,heis still open to what comes. Being in the studio with him was amazing, watching him try different things and being brave and creative on the spot was incredible to watch. He has brought so much happinessandpositivitytoS​acredReich​."The22-year-oldsix-stringerRadziwilldemonstratesa skill and maturity far beyond his years, having played drums in a band and completed three US tours in the back of a van prior to hooking up with ​Sacred Reich​, so is far from "new" to this world. "From being a drummer, his timing is impeccable. He brings a higher level of musicianship and tightness to our band, and he brings a freshness to us. He gives us an opportunity for us to see things from a different perspective, and all of us were blown away by what he can do with a guitar and how effortlessly he does it. His right hand is a buzzsaw. You show him something once and that's it. He came into the studio, which can be very intimidating, and just breezed through it like a 25-year pro."

Always having been drawn to album titles that work on multiple levels, ​Awakening is no different, referring to not only the band recording again for the first time in more than two decades, but also the lyrical themes on the record. ​"It encapsulates what I feel is the most important thing we all can do: we can all do a better job of simply paying attention." Lyrically, though there is a lot of aggression scattered across the tracks, there is also a great deal of positivity and hope, most notably in "Manifest Reality" and "Revolution", the latter referencing the importance of maintaining a positive mental attitude, not giving up and plainly stating "it's time for revolution". Given the current state of the world, Rind believes staying positive is more important than ever. "​There is a lot

of fear, anger and division going around. At the same time, there are plenty of beautiful, incredible things happening right in front of us, day after day. So if we choose to be optimistic, focus on positive things and understand that it's all temporary, good and bad anyway, we can enjoy our lives and be more kind and loving to each other. 'Manifest Reality' says, 'Be the change you want to see'. Ireallycan'tsayanymorethanthat."W​ith"SomethingToBelieve"therecordendsona particularly uplifting high, both in terms of mood and richness of melody. "It was never intended to be the closing track, but it is wonderful that it worked out that way. The fact that I can sing 'Love's the only way to live our life each day' in the last verse is a perfect encapsulation of what the record is about."

To track the album, the band headed into Platinum Underground in Mesa, AZ, and employed producer Arthur Rizk (​Power Trip, Cavalera Conspiracy​) and engineer John Aquilino, Rind insisting both played integral roles in shaping the sound of ​Awakening​. It was a particularly special time for the front-man and Arnett, being in the studio together for the first time after such an extended absence. "​The first day we tracked almost felt like a dream. We would just look at each other and smile and say, 'We're doing this!'. 23 years is a long time, but it felt right and natural. Wiley is such an immense talent. He has a very unique sound and feel. He has great hands and vibrato, and his leads are so tasty and such an integral part of our sound. We are lucky to have him, and I love him." The sessions that followed were a genuine pleasure for all concerned, everything flowing out of the players. ​"I really hit my stride recording the vocals when I just relaxed and let it happen. In the beginning, I was pushing and trying too hard. When I finally understood all I had to do was sing the songs, it happened quite naturally. John and Arthur, who make records all day, every day, commented throughout the process how great and unique the whole thing was. Regardless of what happens with the record, the experience of making it was enough to satisfy us. Obviously we hope people like it, but even if it tanked, it could not change the way we feel about it. We know what we did."

TOXIC HOLOCAUST mutated into existence in 1999, when Joel Grind merged his love for classic punk and metal into his ideal band. Like his influences - Bathory, Venom, English Dogs, Possessed, Broken Bones - TOXIC HOLOCAUST featured blazing riffs, gravel-throated vocals, and a deadly fixation on the evil in man and a post-apocalyptic world. Grind wrapped all of these elements up with a DIY attitude. 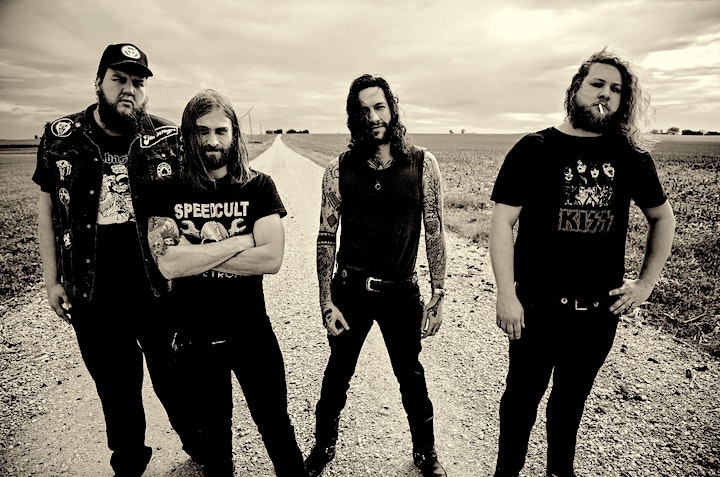 About Against the Grain

Living up to the title of their newest record, Against the Grain have proven themselves to be true warriors of the road. Blazing through the US with their brand of gear-shifting balls-to-the-wall music that incorporates all things heavy - ATG defies categorization as they seamlessly blur the lines of punk, rock, doom and thrash. With the release of their first self-titled full-length in 2009, ATG was an immediate hit - garnering an intensive local fanbase playing 50 shows throughout Michigan. With their intense live show and energized fanbase they were introduced to touring life by Hellmouth and The Meatmen, and began their transformation into a fully-functioning road act. The boys in ATG have yet to look back. After 75 dates in 2011, ATG followed up with 2012’s Motor City Speed Rock and 150 dates in support. Their efforts caught the attention of Self-Destructo Records, who in 2013 released their 3rd full-length, Surrounded By Snakes to such acclaim that they re-leased Motor City Speed Rock on 10” as well. Maintaining a DIY tour ethic, ATG built a national fanbase with their bare hands - quenching the thirst for fast and heavy rock and roll throughout the land. With 650 dates and counting since hitting the road in 2011, ATG has also toured alongside an impressive assemblage of notable acts including - Nashville Pussy, Valient Thorr, Church of Misery, Guttermouth, The Meatmen, The Koffin Kats, Voodoo Glow Skulls, Bongzilla, Atomic Bitchwax, Night Demon, Black Cobra Zoroaster, Hellmouth, The Hookers, Beast in the Field, Lo-Pan and shared the stage with Zeke, St. Vitus, Orange Goblin, Electric Frankenstein, Agent Orange and many more. ATG’s heavily anticipated 4th full length entitled Road Warriors is set to release on July 31st on Self Destructo, and is primed to stake the claim for this Motor City combo’s place in the world of all things rock and roll.