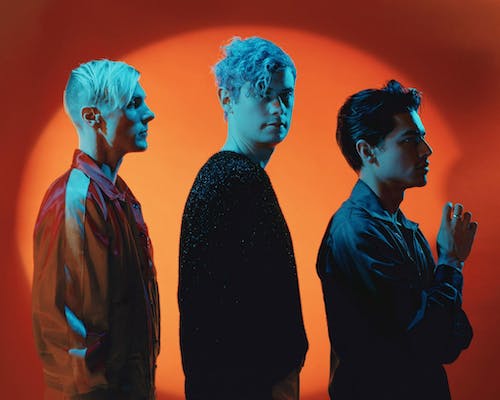 First, DREAMERS’ aesthetic embodies psychedelia. It hearkens back to simpler times on the internet, when pixilated 8-bit imagery of starry nights looked like HD. The group flaunts its self- made exploding rainbow gifs like a unicorn in heat.

Second, contrary to what these psychedelic visions may musically imply, DREAMERS plays smart pop. The 12 tracks on the trio’s debut LP This Album Does Not Exist sizzle and spark with three-minute tunes to perk you up and make you shake.

Third, according to DREAMERS, there’s a point to this.

When DREAMERS—Nick Wold (vocals/guitar), Nelson (bass/vocals), and Jacob Wick (drums) —talk about This Album Does Not Exist, they assume a collective tone of considerate existentialism. They seek to counter the crassness of pop, the snobbery of jazz, and the pretention of indie that zaps the fun out of music with meaning. Yet, they want to draw you in, indiscriminate of taste, style, or ideology.

“Nothing exists by itself,” muses Wold. “Everything in your mind is created in your mind and you see the world through that lens. Everything has a subjective reality in addition to an objective one, especially with music and art. So on this record, we’re toying with that idea of existence and nonexistence.”

If you’ve been dreaming of ditching the rat race to live life on your own terms, perhaps you should look to Ian Johnson – otherwise known as Arrested Youth – for inspiration.

On Sept. 27th the singer/songwriter released his debut LP, FEAR, a searing, nine-track album dedicated the youth of the 21st century. Johnson considers himself part of a “new alternative” class. Deeply influenced by acts like Kid Cudi and The Red-Hot Chili Peppers, Arrested Youth found a refreshing way to channel his frustrations towards a series of social issues faced by our generation with his defiant voice.

“The album reflects our state of mind, growing up in a world controlled by social media, the press, mental illness, violence, and extreme uncertainty,” shares Johnson. “We need to look within ourselves to understand who we’ve become as a society.”

Born and raised in Louisville, Kentucky, Johnson began writing lyrics at the age of 15. In 2016, he graduated from Indiana University with a triple major in business, and took his shot at the American dream by accepting a coveted job in Anheuser-Busch's’ Global Management Program. Within eight months, he was offered a promotion and a raise that would require 60+ hour workweeks. Johnson turned down the offer to pursue music full-time.

“Working in corporate America was a struggle,” shares Johnson. “I found myself waking up every day feeling like a prisoner. I started writing music again as an outlet to express my frustrations.”