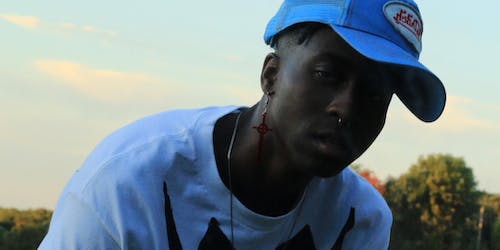 DEATHGOD is a self taught rap artist, songwriter, and producer based out of Omaha, Nebraska. His musical inclinations provides a versatile style transcending genre definitions. From freestyle, hip hop, rap, to emo rap with r&b influences. DEATHGOD’s eclectic and mystical sound intersected with vibe-uplifting performances that allows an audience to be their ecstatic free selves, sets him aside from his peers. DEATHGOD has performed with multiple headlines at local Venus such as Outrspaces, The Bay, Slowdown, and Reverb Lounge.

Here stands a man openly flawed and encumbered with life’s immeasurable expectations, but he’s also a devoted man of God striving for grace. Joshua Crum – just call him J. Crum – speed-raps his feverish words alongside echoing beats and riffs usually coupled with harder rock styles, and counters the intensity with smooth, lingering hooks. Detroit-born and Omaha-based Crum’s inspirational tracks reflect a man bound to his faith, family and fans but with a grittiness churning through time and measures.

“I felt like I’ve grown a lot artistically between Black Sheep and Flawed,” Crum said. “I tried to find the beauty in one’s own vulnerability. I feel I went even deeper into that vulnerability and communicated in a relatable way.”

In the hyper-focused “Monster,” Crum’s crescendo is in the haunting lyrics juxtaposed by the universality of the sentiment “….or do I turn the other cheek….I guess we’re gonna see.” And, just like that, Crum keeps us guessing in sound, styles and his very foundation.

Born Kenny Beaufort from Columbia,SC started rapping 2pac and Biggie lyrics as a kid , to now my own. A strong love for music and story telling about the everyday struggles. Still only 18 and growing as an artist my biggest goal would want to be having my story told.-BARZ

Usually, if you ask a person where they are from, it's one clear, precise answer. Even if they've moved from one city to another once or twice. They'll pick their favorite place, and represent. But ask Yadda Man. He'll get that grin on his face, and you already know the answer is not a simple one. In fact Yadda has lived in more cities at his age [22] than some 30 year olds have visited. Yeah, his immediate fam moved around... alot. But just as you go Aww, and your heart goes out to him, he'll shut it down and say, "That's the best thing that ever happened to me." In an industry where reppin your city is kind of played out. Yadda reps everywhere he's resided in his flow. With a crisp, diverse cadence. You can't really tell if he's from the South, Georgia, Kentucky or from the Midwest CHi-Town, Toledo or Cleveland. Or is he from the Northwestern hemisphere Omaha, Nebraska or Rapid City, SD. Bottom line is the dude is nice. He's versitile by nature. He understands that music is about style. And he wants and needs his style to be as fresh as possible everytime he touches the pen. Of course he was born with a natural ora and charisma. But he had help formulating his talents into what he is today. Hanging with his uncles Julian Thomas who is also a lyricist, manager Chalie Numbas, Producer Symon Phoenix and stablemate MsFortune really played a huge part in his song making ability. "My Crew was.. well still is brutally honest. You spit some bullSh**t, they will let you know! Quick!"And when you hear the bragodocious lyrics and at times sarcastic lines and bold subject matter. You wouldn't expect him to be so polite, down-to-earth. and super humble. He likes to remind himself and other up and coming musicians..."We are all nobody, just trying to be somebody. Why else would you do this?" To sum it up... Yadda Man is a 22 year old songwriter from everywhere with a story to tell everybody that will listen. "I don't know what kind of rapper I am. I never know how to answer that question. I just hear a beat, it makes me feel a certain way, then I tell some of my story to that beat... But in a different way every time."