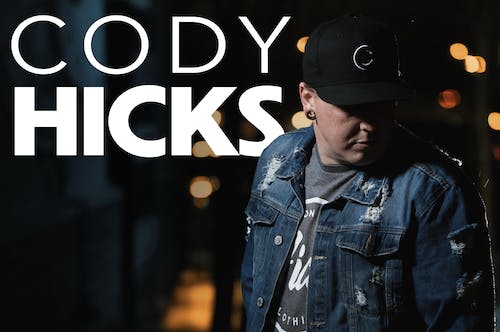 Cody’s captivating, high-energy performance engages audiences as Cody blends musicianship, creativity, and tradition. Cody has been playing live music for over a decade. He’s your typical small town boy and all that you would expect with that...but is he? While his typical chats with people will include a yes ma’am or yes sir, what isn’t typical about Cody is the dynamic and energetic presence he brings to every show, you can’t help but be drawn in. Often you have a talented performer or a talented writer: with Cody you have both. His passion for the music shines through on every level.

It doesn’t take long to recognize Cody’s down home charm and mid-west roots whether it’s listening to his original music, catching an online video, or BSing with him. He was raised in Montezuma, Iowa where he is now raising his own family.

After recording Left Turn in Nashville in 2015, the next step was to shoot full production music video at Southern Iowa Speedway right in the heart of Iowa. The video for has since climbed to nearly 700,000 views on YouTube, and over 1 million views on Facebook by 2019 and drew the attention of Fox Sports, which inked a licensing deal for the song to be featured on Fox Sports broadcast programs such as NASCAR. Left Turn was nominated for Music Video of the Year at the 2019 Midwest CMA Awards.