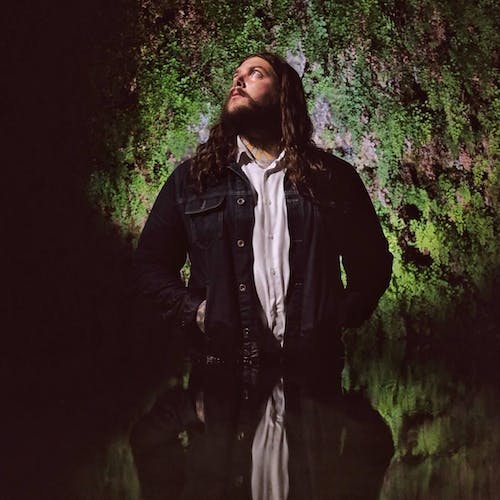 About Amigo the Devil

If you’ve ever heard a room full of people yelling “I hope your husband dies” in a some harmoniously sloppy, drunken unison, you’ve probably stumbled into an Amigo The Devil show. Danny Kiranos, better known to the masses as his musical counterpart Amigo The Devil, has been challenging the expectations of traditional folk, country music purists, and rock/extreme metal fans alike with his morbid, yet oddly romantic, take on folk that has amassed a dedicated and cult like fan-base. Despite being armed with only his vocals and a banjo/acoustic guitar, the live show is worlds away from what people expect of a folk show. Loaded with sing-alongs and an unsuspecting dose of humor to make otherwise grim topics accessible for fans of every genre, the songs remain deeply rooted in the tradition of story-telling that seems to be slipping away from the human condition.

For the press release, I basically just wrote down my experiences going into and my purpose for this record and same thing, use it as you please or if you want me to do something else entirely, let me know. I know Kevin wanted me to dig deep and get personal so I did.

RAMBLING:"I got tired of seeing people overcomplicate what they feel, or worse, ignore it altogether. Amigo The Devil started as an outlet for the brutal honesty that people didn’t feel comfortable discussing. More than create, I listened. At a bar, while eating dinner, at the DMV. Call it creeping if you want but it’s a pass time nonetheless. Even in the music being released about it, people used metaphors to dance around and avoid mentioning the dark thoughts people have and that just isn’t enough to shake you from the daydream, or a fever. It had to be simple, direct and honest. At the start, it seemed logical to learn this process by taking the worst people and trying to find the humanity in them. I wrote some songs about serial killers and realized that no matter how despicable their crimes were, everything was still rooted in the human condition with the same basic need to be needed, to feel valued, to have worth. Through this learning process, I realized there was actually something so much more dangerous than the people committing heinous crimes and it was stained so deeply into the fabric of our daily lives. Doubt and the depression it leaves us stranded in. Every experience is clearly different but for me, all of a sudden, it felt like I was living in a well so deep that if I shouted up for help, it would be lost on the way and never heard. It’s terrifying when it feels like you’re alone down there and there isn’t enough light to look around to realize how many people are there alongside you. For some reason, I refused to talk to my friends and family about it. It was shameful or irrelevant or any other excuse I can come up with to avoid bringing it up and when they would notice and ask, I caught myself repeatedly answering “everything is fine” or any variation of it in that moment. So this record was born. I started listening again, realizing it wasn’t just me. I saw people around me falling into the well but as I started paying attention, I saw people climbing out of it too. These are the stories of leaving the burden behind, whatever that may be and hopefully along with it the realization that carrying them for any period of time doesn’t break us, but makes us stronger than we ever were.

This is where Ross Robinson comes in. He allowed me to become and guided me towards being the best vessel I could be to filter these stories through. We sat there and accepted what wanted to come through, what wanted to be heard. It was the first process of recording that ever made complete sense with absolutely no filter or veil to compensate for the sounds. Recording in a studio untouched since the 70’s with all the original gear, straight to tape. Everything, recording, mixing mastering, to tape! It was absolute and pure brutal honesty, what I’ve been trying to achieve since the start of this thing. Then Brad Wilk added his pulse to it and it felt like together we had given life to these stories that otherwise are sounds and lyrics filling space. Everyone involved dove head first into a pool without water for this one and I’m unbelievably grateful to be in there with them." 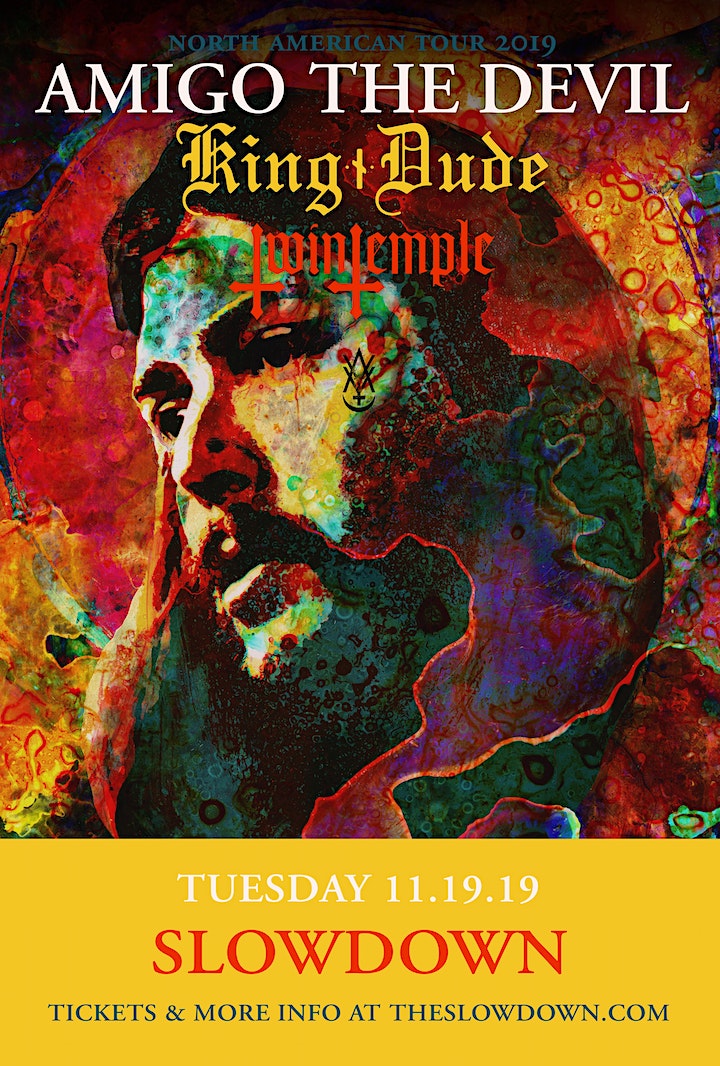 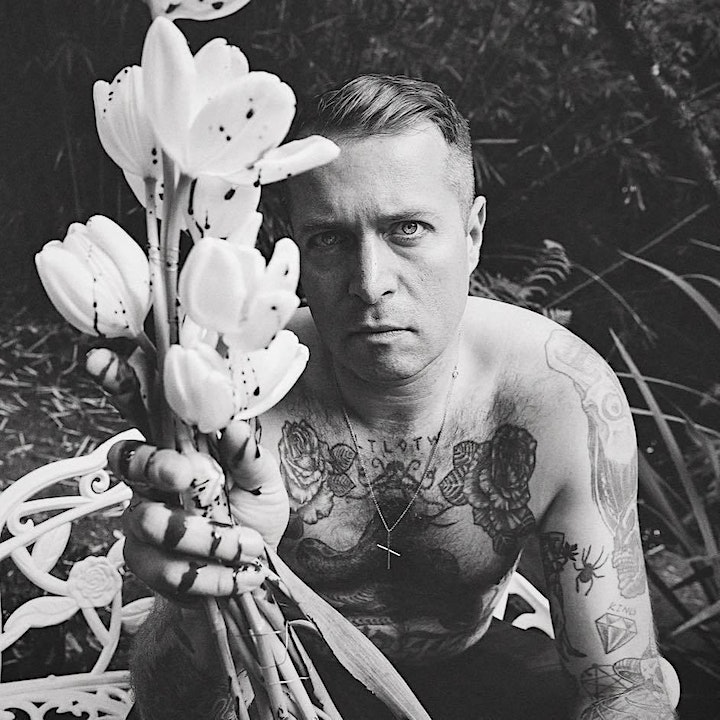 Reverent as it is prophetic and stark, King Dude has previously shared his spiritual visions with releases on Dais, Avant!, Bathetic, Clan Destine, and Ván records. Pulling together the biblical sound and isolation of the bygone days of revelation with an atmosphere filled with hope and salvation, King Dude has woven his own brand of American music.

He brandishes many varied influences in his songwriting. Everything from British Folk, Americana, Country and Blues can be heard in his songs. Even the heavier sounds of Heavy Metal tend to sneak and slither it's way into the King Dude canon. The resulting songs are much more of a modern day hymn then your average pop song.

King Dude's music beg's the soul to lift itself up from the darkness of ignorance, towards the ever shining glorious "Light" that exists outside of all of us yet that which we are eternally connected to and at once connects everyone on Earth. 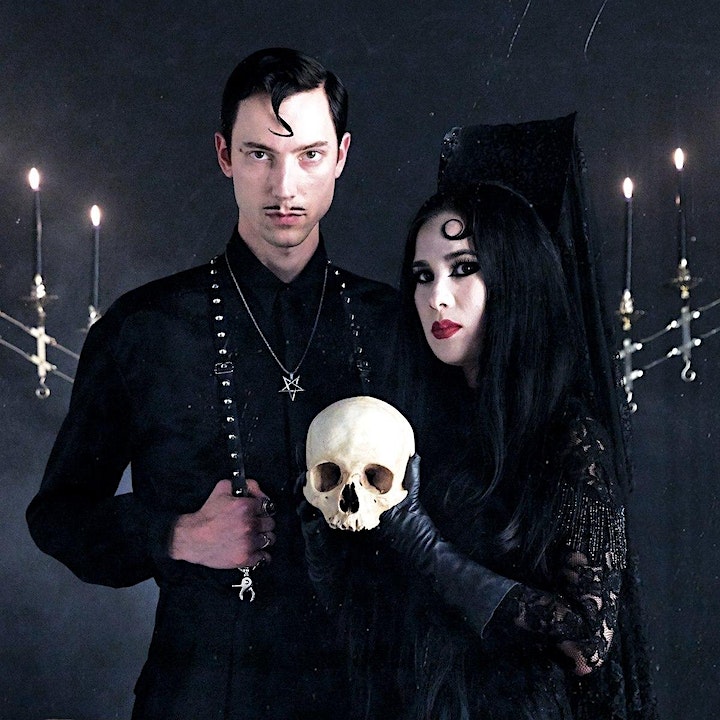 Alexandra and Zachary James are the high priests of Twin Temple, the Satanic Doo-Wop band hailing from the City of Angels.

The band was started on Halloween (a Witch’s Sabbath) in 2016 when a destruction ritual was performed, and Alexandra and Zachary stepped into their power as Twin Temple, energetically killing all their previous incarnations up until that point.

Although you may expect heavy guitar riffs and a thumping bass to accompany cries of “Hail Satan,” instead you’ll hear old-school, classic riffs and Alexandra’s crooning voice that sounds straight out of the ‘60s. While many confine Satan to the likes of black metal, the duo is breaking the notion that Satan has a type. After all, who says Satan wouldn’t get down to some classic Americana? Inspired by the golden era of Rock ‘n’ Roll, Twin Temple rejects conformity of any kind, whether it’s through their magick, performance, or sound.

And while a lot of “Satanic” metal bands begin and end their worship of Satan on stage, the same can’t be said for Twin Temple. Both their music and their practice of Satanism, on and off the stage, are rooted in the ideals of free will and giving space to those who are often not allowed any.

So no, Twin Temple doesn’t drink the blood of virgins or kill babies to sacrifice on the full moon. They are challenging notions about what it means to free the oppressed, fight back against dated and binary ways of thinking, and doing it all while hailing the dark lord himself.

If there’s anything to expect with Twin Temple, it’s the unexpected.